Donors Forum is mobilizing around protecting state funding, and one of the first steps is to take a formal position on the 2015 Illinois state budget:

“We believe that the former 5% income tax rate should have been extended beyond Dec., 31, 2014. However, if other fair and equitable sources can be found to help replace the lost income, we stand ready to support such alternatives.”

This position was initiated by Member feedback from across the state and put in motion through the recommendation of the Strategy and Policy Committee to our Board of Directors.
Download a PDF of the complete budget position here.
Donors Forum presented its state budget position at the quarterly Public Policy Exchange last month. Attendees also heard from local experts who shared their knowledge around the status of the budget as well as implications for the philanthropic and nonprofit sector. 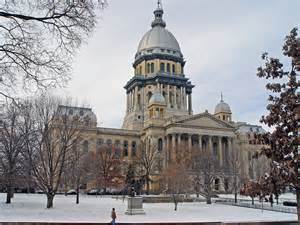 David Lloyd, Director, Fiscal Policy Center at Voices for Illinois Children, said the budget presents clear options. “The State has to raise revenue to help children, families and communities. If we don’t do that, the services have to be cut. It’s a very simple choice," he said. (You can download Mr. Lloyd's full presentation via the link at the bottom of this page).
John Bouman, President of The Shriver Center/Sargent Shriver National Center on Poverty Law, emphasized that the budget problem was not created by runaway state spending. “Even with [the temporary state income tax increase], Illinois remained a low-spending state when compared to others, and Illinois has been cutting spending on vital priorities for a decade and a half,” he said. Mr. Bouman pointed to the state’s structural deficit, which in past years has seen expenditures increase due to inflation and population growth while revenue remains stagnant. That gap, he said, led to the present situation, where services have been repeatedly cut but a deficit continues to exist. (You can download Mr. Bouman's full presentation via the link at the bottom of this page).
Both Mr. Bouman and Mr. Lloyd emphasized the importance of developing revenue-based solutions to the current problems. Mr. Lloyd highlighted how large cuts would have to be to balance the budget without revenue increases, saying that “In order to balance the budget, you need to cut discretionary programs by at least 25%. If the pension law is overturned, the state will need to cut all programs by about a third to balance the budget.” The effect on some programs could be more severe if the new governor keeps his campaign promise to not cut education funds. While those funds would remain level, other programs could be cut fifty percent across the board, resulting in significant reductions in infrastructure programs, healthcare spending, workforce development, child care programs, and more, Mr. Lloyd said.
Mr. Bouman suggested that the long-term effects of these cuts must be considered. “A lot of the impact or cost of a cut is an impact on quality of life, like disinvestment in community mental health, which shows up on the streets,” Mr. Bouman said. “Some of it is long term — what does it mean when 17,000 kids don’t get pre-school? That will manifest itself over decades.”
These cuts could have a negative effect on Illinois’s struggling economy, Mr. Lloyd said, because two of the most important things corporations consider when making location decisions is infrastructure quality and workforce preparation. Taxes, by comparison, are not as significant a factor, he said, and studies have shown that lower-taxing states do not experience more economic growth than higher-taxing states. Additionally, Illinois's backlog on unpaid bills, which shrank after the tax cut was passed, would grow again, Mr. Lloyd said, putting a strain on organizations who were not being paid, which can also drag down the larger economy.
The scope of the problem requires a broad solution, Mr. Bouman said. Budget gimmicks cannot solve the problem, and revenue generators such as gambling or the lottery simply are not significant enough to close the gap. Broadening the sales tax base might help, but many of the proposals offered to this point would not eliminate the majority of the gap.

If you'd like to join us in our mobilization efforts around protecting state funding, make sure to register for our Strategic Initiatives Summit on Thurs., Jan. 22, and select the "Protecting State Funding" breakout session during the registration process. You can also reach out to Caroline Staerk at cstaerk@donorsforum.org for information on how to become involved.
— Jason Hardy, Member Services Support
X