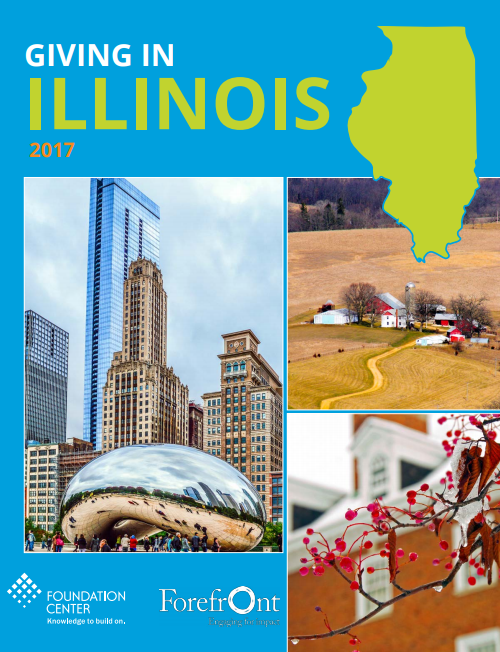 This analysis is based on the Foundation Center’s 2015 grants set, which includes all of the grants of $10,000 or more reported by 1,000 of the largest U.S. independent, corporate, community, and grantmaking operating foundations by total giving. The sample included 68 Illinois foundations with giving totaling $1.3 billion.

Giving in Illinois by the numbers:

Illinois is home to 5,317 grantmaking foundations spanning all types—independent or family, corporate, community, and operating—sizes, and issue areas.

Illinois foundation giving reached a record $3.8 billion in 2015, more than doubling since 2005. (Adjusted for inflation, giving rose 121 percent.) By comparison, giving by U.S. foundations overall rose 72 percent during this period (or 40 percent after inflation). The Illinois foundation community has shown annual growth in giving every year during the past decade.

Funding given by non-Illinois foundations to Illinois recipients:

Because the primary role of most private and community foundations is to provide funding, the public often overestimates their charitable resources. In fact, the vast majority of private giving each year (approximately 80 percent) comes from individuals. Foundations are also sometimes seen as having the resources to fill government budget gaps, especially in difficult economic times. Yet compared to government expenditures, foundation giving represents a small fraction of the total. For example, while Illinois foundations provided giving totaling $3.8 billion in 2015, the Illinois state budget General Revenue Fund for fiscal year 2015 totaled nearly $30 billion and the budget deficit for the state in 2015 was estimated at nearly $125.3 billion.

The Outlook for Foundation Giving

Overall giving by the nation’s private and community foundations reached $64.8 billion in 2016, surpassing previous record levels even after adjusting for inflation.

Looking ahead, the report projects that U.S. foundations overall will continue to benefit from healthy growth in the economy and stock market. As a result, their giving will continue to increase well ahead of inflation.