On Wednesday, February 2, 2022, Governor Pritzker delivered his FY23 budget address. The General Assembly will now finish the business of making next year’s budget.

Below is a summary of key provisions from the Governor’s FY23 budget proposal. Forefront will provide additional budget updates throughout the spring. For a refresher on Forefront’s positions, feel free to explore Forefront’s core value of racial equity and our Public Policy position statements.

We welcome questions and feedback! Feel free to reach out to our team at Policy@MyForefront.org.

The Governor’s budget reflects dramatic improvements to the state’s financial position. Reactions to this budget from sector stakeholders are generally positive, while most are also still calling for meaningful structural reforms, a deeper investment in historically disinvested areas and populations, more support for our essential workforce, and permanent relief for lower-income residents and families. 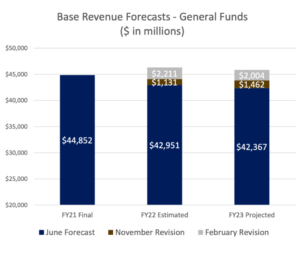 Forefront is committed to advancing racial equity and economic justice in Illinois, which in part includes analyzing the state budget and other policies for their potential to do so. We actively support proposals that have the potential to improve racial equity and economic justice, such as these budget recommendations. (Also, note that many of the workforce provisions listed in the related section below have the potential to increase support and wages for BILPOC workers.)

Forefront assessed Governor Pritzker’s budget proposal for provisions that reflect Forefront’s interest in supporting communities and families, and for tax policy that strengthens and expands incentives for individuals to give their time and money to nonprofit organizations. Below are things that are worth noting that are (or aren’t) in the proposal.

Nonprofit organizations throughout Illinois contract with the state to provide a myriad of services across the lifespan that support well-being in every community. Just as companies that build roads for the state want their contracts that cover the cost of their work, nonprofit businesses that build well-being need contracts that cover their costs. In many cases, the state still pays nonprofit contractors on a fee-for-service basis. Thus, the rate that the state pays for one hour of service should cover the full cost of delivering that hour of service. However, the nonprofit sector has suffered tremendous under-payment for nearly two decades. There has been some progress recently, and the Governor’s budget offers more incremental progress. More broadly, the nonprofit sector continues to call for the creation of a rational, system-level rate-setting methodology. Some of the increases in rates and programs impacting the nonprofit sector recommended by the Governor for FY23 include:

One of the state’s biggest spending obligations, of course, is health care (Medicaid) – and many nonprofit businesses deliver Medicaid services all over the state. Since March 2020, due to COVID, the federal government has provided an enhanced Medicaid match (+6.2%). The Governor’s budget assumes that this enhanced match will end at the end of September 2022, while also projecting increased enrollment over the next few months.

Supporting the sector’s workforce is a Forefront priority, and we work closely with other stakeholders to coordinate on related issues. The workforce crisis has escalated in recent years and is driven primarily by low pay in the sector due to inadequate public investment as explained above; a full pipeline of solutions is warranted. The Governor’s budget does offer some significant measures to bolster the health and human services workforce, particularly in response to the impact of COVID on health professionals. In addition to the items below, Forefront is watching and will support related bills, such as the Rebuild Illinois Mental Health Workforce Act (HB4238 / SB3935) which has relevant appropriations and so may appear in the final budget, as well as HB5325 / SB3958, which would provide flexible funding for employers to improve benefits.

As COVID laid bare, Illinois communities continue to be wracked by deep inequities. Our sector is at the forefront (pun intended) of dismantling inequity and ensuring all Illinoisans may reach their potential and live long, healthy, and full lives. The Governor’s budget includes the following provisions that may make progress in this direction.