A Discussion with Israel Idonije, Founder of FBRK Impact House

A few weeks ago, Forefront President and CEO Eric Weinheimer left Forefront’s current offices and walked the two blocks north to 200 W. Madison: the home of FBRK Impact House, and, come Spring 2020, Forefront. There, Eric sat down with FBRK Founder and former Chicago Bear Israel Idonije to discuss Izzy’s upbringing, what drew him to the Chicago impact community, and what role he sees the newly completed space playing in the social impact sector.

Eric Weinheimer: Tell us your story. How’d you get here? Where are you from?

Israel Idonije: It’s been an incredible journey. I was born in Lagos, Nigeria, and my family moved to Canada when I was just four years old. My parents were missionaries, and my father got accepted to the Providence Bible College in Canada. After finishing at Providence, my father was placed at a church in Brandon, Manitoba, which is a small town of 60,000 people and where I grew up.

The program my dad started in Brandon was called Street Love. He was focused on helping the people who didn’t have a voice, people who needed help and were kind of cast out. He would collect food from local partners and my parents would turn it into soups and sandwiches to feed the homeless.

Eric Weinheimer: Were you involved in this process?

Israel Idonije: Yes. I was always a big kid, so my father had me doing the lifting. I helped load the truck, carry the food from the grocers, and sort the items.

That was our childhood, and where it all began. As an adult, playing in the NFL, it was important to me to use my voice and my platform to give back to the community.

Eric Weinheimer: Did you know at an early age that you wanted to play in the NFL?

Eric Weinheimer: How did someone not interested in football end up playing it professionally? 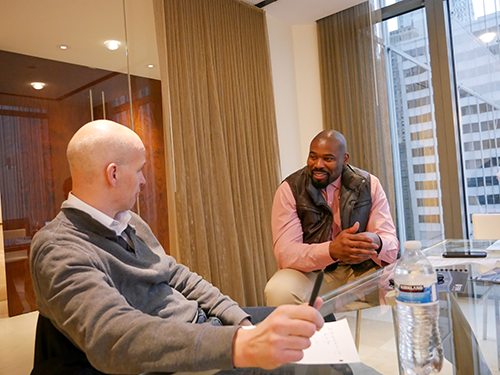 Israel Idonije: My boss at the YMCA, who was also a coach helping to restart a fledgling football program at my high school, asked me to play. He then wanted me to try out for the state team in Winnipeg, but I didn’t want to go. My mom saw the tryout as an opportunity and felt it was important for me to go, so I reluctantly went. That decision changed my life. The head coach of the University of Manitoba was there, and he noticed me. I ended up playing for the Manitoba Bisons. After a year of being benched, I went on to be named first team All Canadian and CanWest All-Star. My route to signing a free-agent deal with the Cleveland Browns was unconventional.

Eric Weinheimer: How long were you in Cleveland?

Israel Idonije: I was only there for the first preseason game. I broke my ankle and was sent home. I was the first Manitoban to play in the NFL, so I was avoiding people because I didn’t want to answer the questions of why I was back home.

My mom helped me to focus. She knew that another opportunity to play was going to come and she urged me to be ready for it. I learned a valuable lesson through that experience. Life offers us many opportunities. We need to do our part and be in the best position to take advantage of those opportunities.

Israel Idonije: She’s amazing. I’m blessed and fortunate to have her as my mother. With her guidance, I got back to my physical therapy and rehabbed my ankle. Sure enough, the Bears called me. The Bears signed me to a one-week contract, the day before my birthday, November 16, 2003. At the end of the week, they said they’d sign me until the end of the year. At the end of the year, they gave me the option to go to Germany to play for NFL Europe to develop and get better.

It was an incredible experience to play in Europe, and we ended up winning the world championship. I came back to Chicago and made the 53-man roster. That one-week contract turned into 10 years with the Chicago Bears, which was an amazing run. Having an 11-year career in the NFL, despite all odds, is more than I ever dreamed.

Eric Weinheimer: How did your experience in the NFL prepare you for the work that you’re doing now with FBRK?

Israel Idonije: I’ve learned that so much in sports correlates to life. I’d love it if all our youth and kids competed in some capacity. Sports help you understand what it means to set a vision and to create a plan. On a team, you have to look at the skill set of each individual and how each person, with their unique talents, will contribute to achieving the goal.

FBRK is a big vision. Two years ago, when we started focusing on FBRK Impact House and what we wanted to build, people told me it would never happen. ‘You’re never going to get all the funders to come under one house. Why would they do that? It’s conflicting.’

But the impact community in Chicago, specifically, is already together. They just did not have a physical space. It became clear when we started talking to groups and leadership, and people who are in the impact space, that Chicago’s impact community is already a dynamic force. A lot of people are working together, collaborating and pushing the needle of impact across a number of different sectors.

We saw an opportunity for all members of the community to lean on one central hub as a place where they can come to learn about who’s giving, how they can give, how can they get support, and how they can connect with impact themselves.

FBRK Impact House is just the space. The key to what we’re building is the people. As FBRK Impact House, we’re going to work to ultimately create value for the community. We have to be resilient about the value we create.

Eric Weinheimer: What role, in your mind, does Forefront play in FBRK Impact House?

Israel Idonije: Forefront is exciting to us because, in some capacity, they are already working in the spaces that we, in our initial vision, felt that the impact network would represent.

Forefront is a support system for all the organizations that they work with. It’s brilliant. We strongly believe in execution through partnership, and not reinventing the wheel. The set of tools that Forefront has at their disposal, and all the countless organizations out there that need those tools, or don’t yet know that they need those tools, can now plug into FBRK Impact House.

Forefront already has a tremendous network. As FBRK Impact House, we are looking to connect those dots to break down silos. Forefront is already doing that in some capacity: bringing people together, starting conversations, making introductions. When building a network like this, I’m very clear there are things that we don’t know. Although we’ve been serving in the community for a long time, the wealth of knowledge and expertise that Forefront has in the impact space, and being plugged into that community, on the ground here in Chicago, is invaluable. 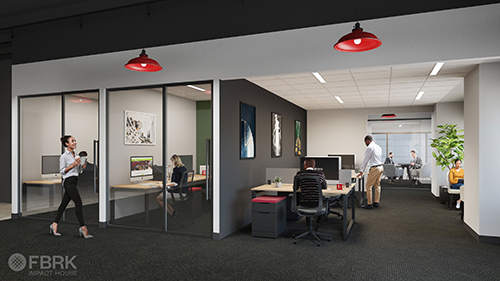 We are going to make bold statements. I envision FBRK Impact House making a bold statement about poverty, food insecurity, health, education, and all the areas of need in our city. I’m looking forward to really putting the community together and bringing our leadership together to say, “We’re working on all these things.”

Eric Weinheimer: How would you describe the FBRK Impact House in three words?

Israel Idonije: The first is unification. Coming together at every connection.

The second is a force. I feel like this space is going to be a force for so much good.

The third that comes to mind when I think of FBRK Impact House is change. Organizations coming together in this way will change things. FBRK Impact House is going to change lives and communities. Ways of thinking will be changed because of what this group of people does at this location here in this city.

Eric Weinheimer: What does your mother say about FBRK Impact House?

Israel Idonije: She’s excited to see the vision come to fruition. She knows we’ve been working on this for a long time, so when she gets to come here and walk through FBRK Impact House she’ll be ecstatic.

When I step back and FBRK Impact House has its own voice that is clearly the voice of the community, I think that’s what’s going to be a really exciting moment for me, and for her.