Many foundations struggle to help their grantees leverage limited resources and expand fundraising and engagement efforts. How can philanthropy best support nonprofits to build their capacity and access more resources so that they can effectively serve their communities? How can practices of community-building be further amplified at the local level?

In Aurora—the second largest city in Illinois, located in the outer reaches of the western Chicago suburbs—Vicki Morcos, President and CEO of the Dunham Fund, has been working to solve this conundrum. Since 2013, Vicki has been cultivating community connections by organizing subject matter workshops, diverse events, and networking opportunities for nonprofits in her area. A Forefront board member, Vicki understands the value of intentionally creating spaces and opportunities for local leaders to learn, connect with and support one another.

As the Fox Valley leader of Forefront’s #ILGive campaign, Vicki brings her convening skills, energy, and passion to support her community on Giving Tuesday.

In 2019, #ILGive raised nearly $1.95 million for nonprofits in Illinois, surpassing Forefront’s goal for the year. Nearly one third of this amount was raised in the Fox Valley region, which is a testament to Vicki’s leadership and commitment to maximizing this unique fundraising opportunity. Back in 2016—the first year of Vicki’s workshops—34 organizations in the Fox Valley region raised $460,000. With more than twice as many organizations now participating, the dollar amount has doubled, and donations from Fox Valley accounted for over 30% of all 2019 #ILGive donors.

Vicki joined the Dunham Fund in 2013 as a Partnership Officer and began working with the Forefront’s #ILGive campaign in 2016. She quickly noticed that there were knowledge gaps about how to effectively leverage the available opportunities despite #ILGive’s accessible fundraising platform. Vicki understood that a more expansive Fox Valley community-wide framework could be established by encouraging best practices throughout the Giving Tuesday campaign, resulting in bolstered giving and year-round impact.

“Seeing nonprofits gain confidence with their social media and digital fundraising skills and be rewarded during the #ILGive campaign excites me,” said Vicki. “Knowing nonprofits are accessing another revenue source for unrestricted funds, plus broadening their audience—whether it is acquiring a new donor or recipient of their services—motivates me to share the benefits of participating in #ILGive with the community.”

Any nonprofit in the area can participate in the Dunham Fund’s programming for free, regardless of whether they are a grantee. The first year, workshops in Aurora focused on #ILGive, recruiting organization leaders to collaborate and co-develop fundraising strategies in small group-discussions. Programming has since grown into two official workshop series, co-sponsored by the Community Foundation of the Fox River Valley and Forefront. Vicki brings her unique and dynamic perspective along with external subject matter experts to advise Aurora nonprofit leaders about fundraising best practices and provide ancillary professional development opportunities.

“One of the coolest things to watch is how the community has become more close-knit,” says Suzy Lee, Forefront’s Director of Nonprofit Engagement. Suzy runs the #ILGive campaign and heads to Aurora every fall to host the #ILGive training series. “We want to create opportunities where the folks who have been in the work longer can share their knowledge with others.” 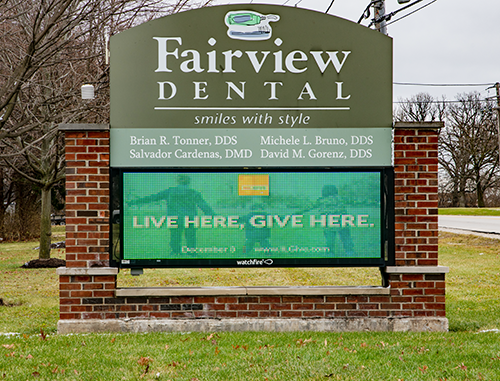 Fairview Dental, located in Aurora, advertises the 2019 #ILGive campaign to spread the word about Giving Tuesday.

In addition to her efforts to educate nonprofit leaders about how best to raise funds they need for community impact, Vicki also created a comprehensive marketing effort around #ILGive. In addition to networking and other promotions, marketing materials and flyers are distributed to ensure that anyone who ventures into an Aurora dentist office or a local Dairy Queen knows about Giving Tuesday.

Vicki’s ability to bring her community together is most evident at the annual #ILGive celebration. The event highlights the successes of Giving Tuesday through food, drinks, togetherness, and a raffle with $40,000 worth of incentive prizes for participating nonprofits. The room’s many conversations between leaders of social impact organizations are lively, engaging, and focused on all facets of community need.

Vicki is on a first-name basis with nearly all the event’s 125 attendees, including representatives from 75 local nonprofits, community stakeholders, and Dunham Fund board members. A stream of local leaders excitedly update her on local goings-on. “It’s very gratifying to see people come together to celebrate their results from #ILGive and the critical services they provide our community daily,” said Vicki about the evening. “They do so much with limited resources.” 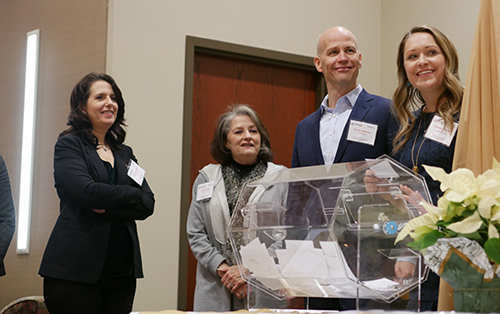 The best way to see Vicki’s impact in Fox Valley is through the various organizations that are intentionally working together in ways that they hadn’t before. The leader of one of those organizations, Danielle Hollis, Executive Director of Water Street Studios in Batavia, has attended every single Dunham Fund workshop. She understands and values the importance of connectivity among nonprofit organizations. Danielle is also constantly looking to further grow and steward partnerships that will ultimately result in better addressing the region’s needs.

“We don’t really do anything standard at Water Street,” said Danielle, laughing. “Last #ILGive, we and nine other local organizations made a video that brought people together to raise funds for the arts rather than just for Water Street. We took out our logo, we took out our organization, and said it was just for a cause, and Water Street Studios raised $24,000, which was $15,000 more than we had raised the previous year.” This year, Danielle’s organization upped the ante even more, raising $35,000 on Giving Tuesday. “As soon as you can rally people together towards a common good, people will invest in that because we invest it back in the community. Rather than being in competition with each other, we’re supporting one another.”

Another prime example of community building in the Fox Valley Region during #ILGive is through the “friendly rivalry” between East and West Aurora’s Public Schools. Bill Deligiannis, Chair of the Aurora East Education Foundation, has been participating in #ILGive workshops for the last few years. It was through the workshops that he first met Ingrid Roney, chairperson for West Aurora Public Schools. They discussed and developed a plan to connect the two “rival” school systems, ultimately holding their first annual joint Giving Tuesday event this past December, with free entry, free food, and raffle prizes. As the event hummed along, guests continued to donate online, resulting in over $28,000 raised for West Aurora public schools and over $30,000 raised for the Aurora East school system.

“Through Vicki, and through the Dunham Fund, we were able to educate ourselves about what to do,” said Bill. “Try this. Try that. Get your peer fundraisers. Spread the word as much as you can.” 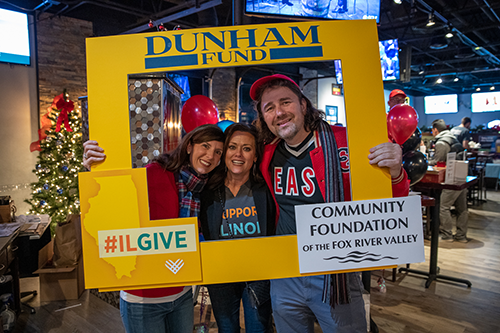 “The idea that Forefront, the Dunham Fund, and the Community Foundation of the Fox River Valley are all working together to help nonprofits in this area is unbelievable,” says Ingrid. “We’ve never had this much support.” Ingrid attends Vicki’s programming year-round, including the fall and spring series as well as webinar trainings. She says the programming helped her with professional and board development immensely. “It’s kind of funny, because when we get done with #ILGive, we say, ‘What now, Vicki?’”

Danielle of Water Street Studios says that throughout all her organization’s various outreach experiments, Vicki has been cheering from the sidelines and providing support. “She gives a lot of people a lot of confidence,” said Danielle. “If there’s something we need more information about, Vicki’s going to go get it. There’s no doubt about that.”

Vicki’s investment in #ILGive pays off throughout the rest of the year, as evidenced by the continuing collaborations and connections created between nonprofits in the area. “I am honored to work beside our partners to support the nonprofit community’s efforts,” said Vicki. “I am in awe of the collaborations that have evolved from bringing folks together.”

Forefront’s Suzy Lee sees Vicki’s work as a long-term investment that breaks the norms through its inclusivity and heavy focus on building a sustainable social impact sector for Aurora. “The community has gotten stronger as a group,” says Lee. “It’s really amazing. And all that is possible because Vicki got us in a room together.”

To continue the conversation and learn more about the Dunham Fund’s work in Aurora, please reach out to Vicki Morcos at vmorcos@dunhamfund.org.

Want to stay up to speed on #ILGive’s upcoming 2020 campaign? Sign up here to be notified of fall registration dates, statewide workshop opportunities, and more!